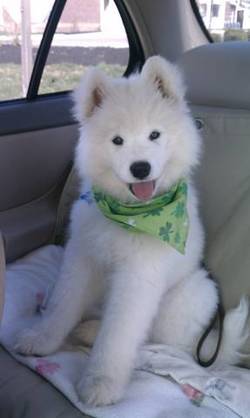 ​The beautiful white, double coat of the Samoyed blends well with the snow in Northern Siberia where the breed originated. It is acceptable to have cream or biscuit part of their coloring. This enticing coat coupled with their gentle personality won the hearts of the Samoyede peoples as they integrated the dogs into the family allowing them into their homes.

The saying "It's a three dog night" came from the northern regions. It means it's so cold outside you need three dogs to keep you warm all night. The gentle, friendly personality of the Samoyed provided warmth to the very old and the very young.

​Makaio was born December 14, 2011. He has followed in his sister's paw prints as a therapy dog. Makaio is a United Kennel Club Altered Champion.  The highlight of his conformation career was being honored Altered Reserve Best in Show at the UKC Premier events.  Makaio is a well rounded working dog as he has earned titles in rally, obedience, agility, herding, weight pull and conformation. He has several activities he enjoys to help relieve the stress of his work. His favorites include hiking, bikejoring (pulling someone on a bicycle), and cuddling. Makaio is always up for tummy rubs!

Did you know the Arctic suns and snows have bleached the Samoyed coat tipping the hairs with an icy sheen?
A tremendous thank you to the following who have captured wonderful photos for us:
​Jennifer Gerdes; Photography by Thamara ​